BARINGA Australian Whites, Oberon, and Kanoona Park Australian Whites, Curban, sold 67 of 70 rams to a $2053 average at the inaugural Central West Australian White Ram Sale last week.
The sale was supported by buyers from NSW, Queensland, Victoria and South Australia and kicked off with seven select stud rams selling to a top of $4250 and averaging $3429. 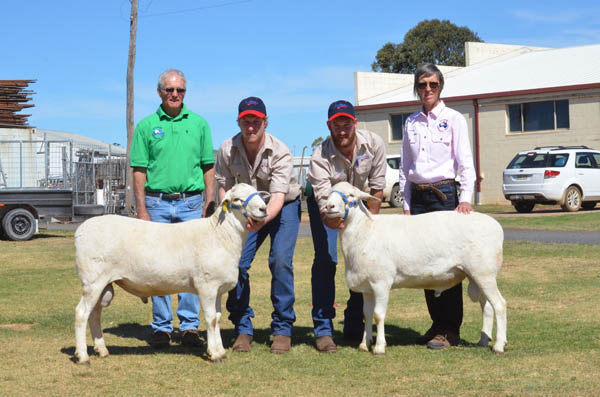 Malcolm and Kerrie Plum, Kalnari Australian Whites, Tarcutta, purchased the sale topper and equal second highest priced rams.
The top-priced lot 1 had been used at Baringa and was an outcross of the Kalnari flock.

Sired by AWF 328 the ram will be used within an embryo transfer program as well as naturally over select stud ewes.

Their second ram was purchased at $3500, and Mrs Plum said the sire had “good frame, good figures and an excellent carcase”. “He has 116062T on both sides of his pedigree, 116062T is a line we know well and has performed very well within our flock,” she said.

“Both sires will be used in the stud and will complement our breeding focus, which is on growth, early maturity and productivity.”

Luke and Tina Curry, Lukina Sheep studs, Gulgong, purchased three rams at the sale including lot 4 at $3000. Having recently started their Australian White stud the ram will be used as a foundation stud sire.
“He’s an impressive ram – we have seen his progeny which are good, he has the biggest eye muscle depth in the catalogue and is an excellent shedder which he has certainly passed onto his progeny,” Mr Curry said.

Allan and Jill Aynsley manage 2000 hectares at Fullerton on behalf of Michael Doyle, Doyles Restaurant, Watsons Bay, Sydney, and purchased six rams at the sale for an average of $2083.
Having used Australian Whites rams for the first time in 2013 over Dorper ewes, Mr Aynsley said they were extremely happy with them, and the lambs were fast growing, early maturing with a great temperament.
“We are currently breeding up to an Australian White flock so we are retaining all of the ewes.”

The rams were selected on shedding ability, carcase and frame and good black feet.

Pat Hannan, “Cloverdale”, Cockaleechie, South Australia, purchased seven rams at an average of $2000.
The Hannan family run a commercial Wiltipoll flock on the Eyre Peninsula and have decided to make the switch to Australian Whites to put weight and quick growth into the lambs while maintaining shedding.
Mr Hannan said he selected his draft of rams on the basis of length, width and depth of body, large frames and good feet and legs. 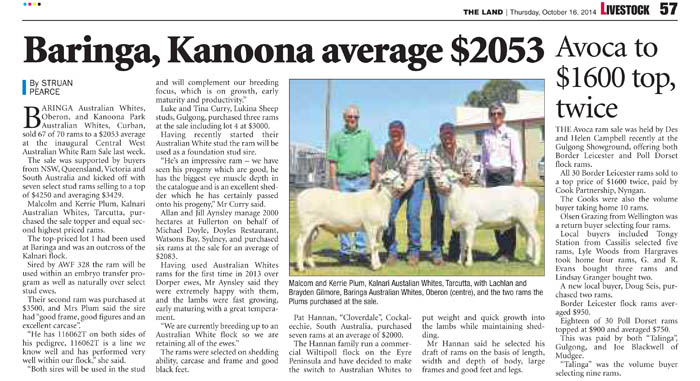